My husband had the brilliant idea of taking the leftover apple grindings from our cider pressing, mix them with cracked corn, acorns, a mineral block, and other things that deer like to feed on. He assured me that hunters would buy it. I scoffed. And then bit my words when he sold out in less than an hour.
"Back to the grind" he decided. Literally. 15 bushels of apples later, we had more deer feed, and now a surplus of cider. How can one have a surplus you ask? When the freezer, and all carboys are full. And there are still 6 turkeys to fit into said freezer. And you can't possibly sip another mouthful of cider for at least a week.
I dug through the empty wine bottles (yes, there were plenty), filled up 10 of them and took them to work. "Just trade me something" I said to co-workers.
The next day, I arrived at work to a loaf of home made bread, a jar of mustard pickles (an east coast preserve that was re-gifted to me, ha) a jar of honey, a can of beer and this: 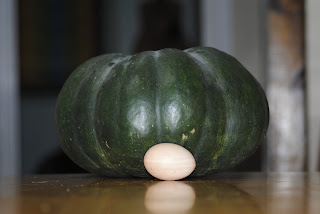 "What the heck is this?" I tried googling squash and looking through pictures. Closest I came up with was Buttercup (it was not) and Kobacha (Nope, not that either)
The squash came in a CSA basket that my boss subscribes to. It came from Salt of the Earth farm, located at the east end of Kingston. I texted them with a picture.
"Musque de Provence squash" came the reply.
"It's a great soup squash. Google it. It's a traditional French thing. Enjoy!"

So, I lugged it home. Two days later, I stabbed it a few times, and put it in the oven.
Two hours later I pulled it out, cut it in half and scooped out all the soft, yummy roasted flesh. 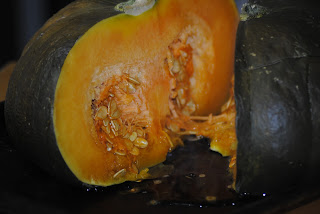 Two cups of it (along with 3 eggs and one cup of maple syrup, all produced in our backyard!) went into this Brown Butter Maple Pumpkin Loaf. I don't think I browned the butter enough, I was too concerned about burning it! Also, I couldn't find the cinnamon. Until the next day, sitting in plain sight on the counter.

The rest of the squash went into soup. Which we enjoyed with fresh baked bread (I did not bake it), cheese, some of my red pepper jelly, roasted beets (they were also bartered for some cider!) with apple cider maple vinigrette and of course wine (Sandbanks Dunes is my current favourite white) Fintan ate 3 bowls at dinner.

Put roasted squash, onion, garlic and spices in your favourite soup pot along with stock. Simmer until onions are soft. Blend. Return to pot and reheat. Slowly stir in 1/2 cup of cream (or more or less, or none. Are you counting calories?) Season and serve. I drizzled some chili oil on the adult servings.
Enjoy :) 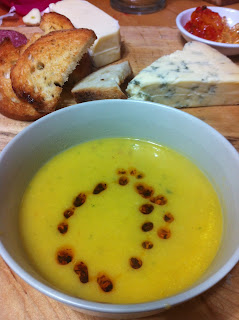