Our third attempt, and third team configuration, but still with the “original” three teammates,  at Wilderness Traverse finally sees Whiskey Tango Foxtrot finishing the full course!!
Three weeks (hmm...a theme of three’s?) before the race Candice comes clean. She sprained her knee back in June, and isn’t sure how it will hold up. How do we feel about bringing another team mate into the fold? Well, the first year we raced saw a team mate change about three weeks out, so this wasn’t exactly a new idea. I think her thought is if we bring Steve on board, and her knee fails, we can still continue on as a ranked team. I’m not totally convinced Steve knows what he’s getting himself into. I laugh (nervously) over the next week as he bombards me with email messages:
“What kind of bike do I need?” 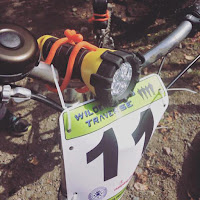 
Fortunately, Steve is a Parry Sound local, which also means we have a place to crash, and he knows parts of the area quite well. Definite nav plus.  Makes parts of our course plotting the night before quick and easy. Although,  he hasn’t paddle Massassagua before, and the trek between CP10 and CP12? Nope, never been there either! 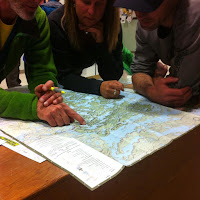 After a great breakfast of waffles and sausage, we head over to the start line and GO! It’s a mass run start. I don’t like running, but it’s a rather short one, and likely the only actual running that I will have to do over the next 24 hours or so. We transition to a short bike ride and something is not right. We quickly figure out that my back tire is flat. I curse my bike mechanic back home. He was supposed to check my tires and change my tubes. Hmm...not a great start. We fix it, keep going, get through the first few CP’s in good time and hit the paddle. Where we are confident we’ll shine, after all, we are ALL paddlers. Despite the crazy wind, we make great time, passing about 9 teams along the way.. Near the end, we pull over for a quick fuel break before a rather long crossing to the end.  A man and his two sons burst through the trees, cradling shotguns, telling us they feel sorry for us with this wind. We pick our line and head to the dock at opposite shore. We arrive with a few hours of daylight to see us through the beginning of our trek. Have I mentioned yet that I turned down a wedding invite for this? 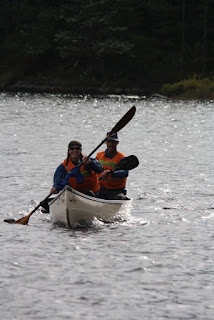 The first jog along the road brings a very strange sensation along the outer sides of my thighs. I can feel one of my shins tightening up. Now something is not feeling good in my knee. What the heck is going on? We drop down to a brisk walk instead. That feels better. We pass through the Deliverance cottages, complete with the greying-long-haired guitar playing dude to CP9 and set our bearing to take us to CP10. We arrive in decent time, to steak, tea, shoulder massages (an old friend was a volunteer here!) and the news that we are in 20th place. It’s a little past 8pm. Dinner at the wedding will be done by now, maybe speeches starting?

We realize at this point that we have a good chance of not being short coursed. We set our next bearing, and head towards CP11. Moving quicker than in past years. Although all the climbing over ridges has my knees screaming at me. Also, our hands are getting ripped apart by juniper bushes. I should be in a pretty dress dancing right now. Grant & Steve make a great nav duo, and we make it to Shangri- La before midnight. Only one small error, but the light of the heated tent showed us we missed them by a bay or two. It wasn’t until days later, that I realized that this CP was manned by the wonderful man who saved me with a single strawberry in 2013. This year, he gave me soup and water. And told me that we were going to finish….the whole course!!

As we make the LONG journey south to CP12, my knees are really giving me some troubles. But I keep thinking if Candice is still moving forward on her knee, than I have to as well. I hit my lowest point ever on this portion of the trek. I think I may have experienced my first “bonk” When we found the trail, I was stumbled along as if I was into my second bottle of wine (by this point, the wedding reception is all over, and I would be stumbling….but still in a pretty dress!) I was hallucinating (although I wasn’t the only one, at one point Steve yelled out, he “saw” a porcupine in his path) I was dehydrated (my throat felt like it was being stabbed) and food made me nauseous. I even found Grant sitting on a rock at one point. He NEVER sits in a race. We finally got into the TA, after picking our way along the shore of the Moon River, and Heather (Grant’s wife who was volunteering) took one look at me and asked how I was. I burst into tears and said I couldn’t talk about it. After a cup of hot chocolate, soup and half a gatorade I was ready to go. By 6:30 or so, we jumped on our bikes to ride the final 65km or so to the finish line.  We opted to take roads, we figure we’d be a bit faster, especially considering knees. I feel pretty good over the course of the ride, despite the fact that my bike shorts seem to be wanting to constantly give me a wedgie. Also, have you ever gotten dirt INSIDE your bike shorts? That sucks, a lot. One small nav error as we we searching for CP 14 set us back 30 minutes or so. We retraced the beginning of the race along the Seguin Trail for the final stretch over roads, as we were struggling with hills. The final 4km seemed to drag on forever….but we rolled into the finish line….22 minutes after 2:00. Elated, but slightly disappointed. Bob & Barb very kindly ranked us anyway, and we are super stoked to have finally completed the long course (140 km in 30 hours and 22 minutes), after two years of being short coursed. 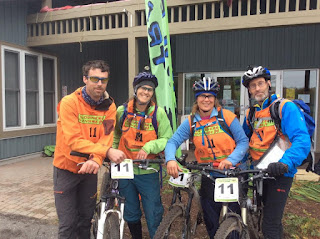 A big thank you to Bob, Barb and the rest of their team and volunteers for putting on a great race. And to all of the other racers that race this, and other races, without a whole bunch other “crazy” people, we wouldn’t get to do it. Friends often ask me why….I  don’t really know the answer, but I know you understand. ;)

Email ThisBlogThis!Share to TwitterShare to FacebookShare to Pinterest
Labels: play